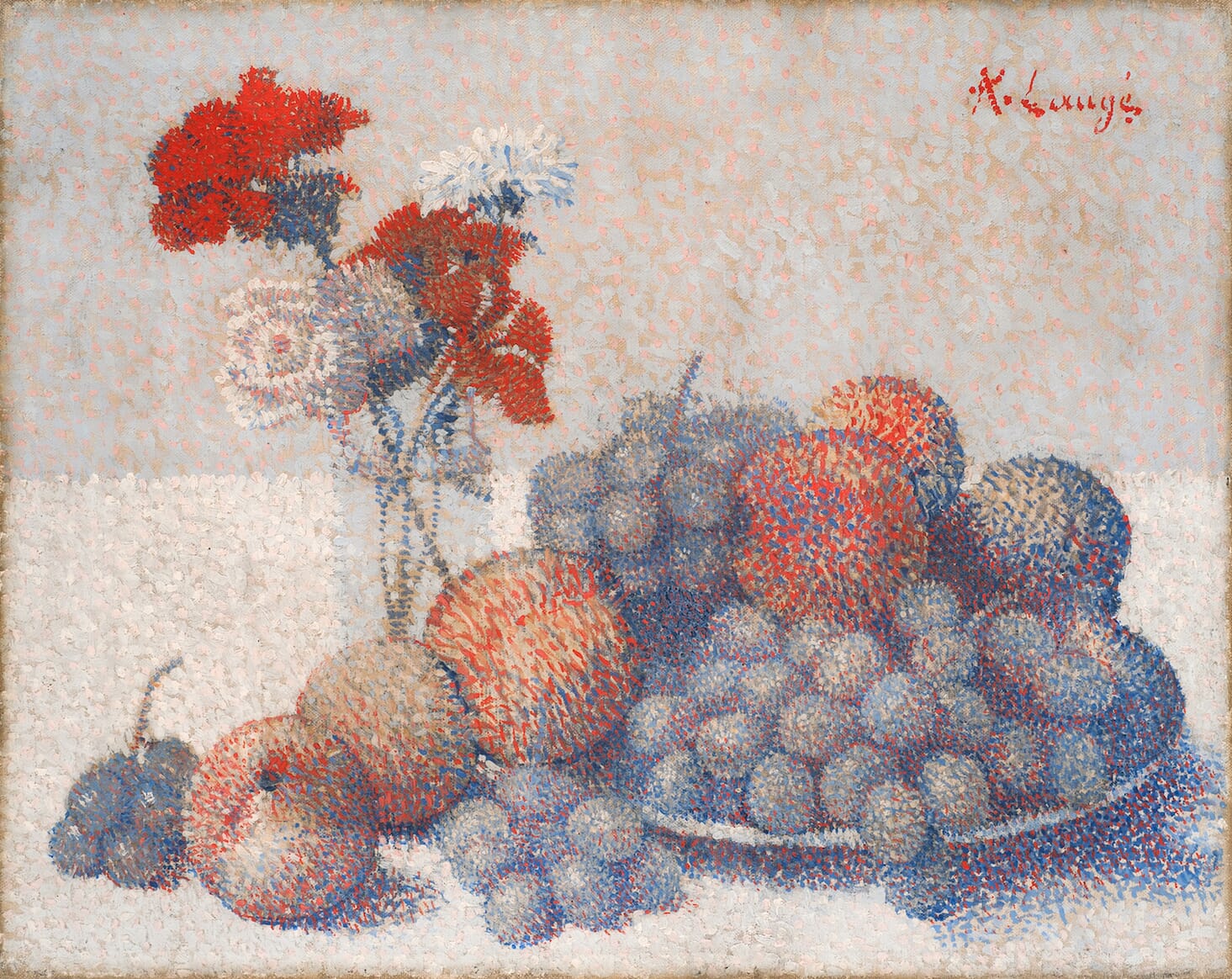 The son of a farmer, Laugé was drawn to painting from a very early age, to the point of painting by necessity with pigments he found in nature: "the blackberry with its vinous juice, crushed, gave him red; wild garlic with its punctured bulb creates a lovely blue; as for yellow, he did not find a generous plant to give it to him and with his small savings, he bought it in the town" wrote his friend Jean Girou.

He received lessons in Toulouse with Antoine Bourdelle, Henri Martin and Henri Marre and then in 1881, left for Paris where he was reunited with the first two. Penniless students, these southerners shared miserable accommodation and makeshift meals. At the École des Beaux-Arts, Laugé attended, with Aristide Mailhol, the classes of Jean Paul Laurens and Alexandre Cabanel, who urged them not to give in to Pointillism before learning to draw. In addition to the classes given by their professors in the rigid academic methods, the young artist also benefited from the cultural and artistic life of Paris of the 1880s, truly revolutionized from the temerity of the Impressionist artists whose paintings were exhibited in the rooms of the Panorama of Reichshoffen, at Durand-Ruel, rue Saint-Honoré, rue Lafitte and elsewhere. Puvis de Chavannes' works exhibited at the Salon of 1886 would have a lasting influence on Laugé for their simplicity, their bareness and their stature, qualities that he would later combine with his experimentation on the decomposition of colours of shades to form the fundamental elements of his style.

Although in constant contact with "the true revolution brought about by the lucid audaciousness of the impressionist phalanx",[1] which was happening in Paris, it was only once he had returned home that he started to take an interest in the artistic techniques practiced by Seurat, Signac, Pissarro, Angrand, Dubois-Pillet. Equipped with a solid artistic background and well informed about Impressionist and Post-Impressionist innovations, he moved to Carcassonne in 1889 where the dense and contrasted light of the south naturally brought him towards a solid and geometric divisionism that was inspired more by Pissaro than by Monet. He benefitted from solid support at the heart of a group of friends, especially Achille Astre who opened a gallery in Paris on the rue Laffitte in 1905, Achille Rouquet, a writer, draughtsman and printmaker for the Revue Méridionale which he established in 1886, the poets Prosper Estien and Achille Mir, Jean Alboize, the future director of the magazine L'Artiste and curator of the museum of Fontainebleau, lastly the Sarrault family, which was well established in the city, of whom Laugé made several portraits. After Carcassonne, he moved to Cailhau, Alet, and Toulouse.

In this magnificent still life that dates to the 1890s, Laugé has followed the rule decreed by Signac in his publication D'Eugène Delacroix au Néo-Impressionnisme: he has used pure colours – the three primary colours – that he has divided but not mixed, juxtaposing them to create nuances and colours for lighting using an optical effect. He uses the blue shadow "faithful complement to his controller, light". But Laugé was not dogmatic and his work shows little interest in the scientific aspect of research on the division of shades and theories of colours. It is mainly the poetry of lighting effects and alternations of colour that fascinate him in this arrangement of flowers and fruit from his garden, assembled simply on a white tablecloth. Doubtless he was also influenced by Japonisme, fashionable at the time and which he could have learned about from the many prints that were being exhibited and collected. In the upper area of his composition, the canvas is mostly left in reserve to introduce a warmer shade in the light blue of the background. In the same way, his signature stands out in red against the blue background and revives and limits the cold tendency. The glass in which the red carnations and white flowers bathe is painted in the same way as the background in the upper section of the painting, it is therefore mainly by an optical effect that the viewer mentally recreates its presence. The search for balance, geometry, is obvious in this still life comprising a skilfully balanced distribution between large and small spheres, apples and grapes, placed on a circular platter, close to the cylindric form of the glass. Only the flowers have a random shape, organic, that creates a contrast with the geometry of the rest of the painting.

Laugé's works were never accepted at official Salons. He exhibited at the Salon des Indépendants in 1894, at which most of the works unleashed violent criticism. The same year, he participated in an exhibition with the Nabis group in Toulouse. In the early 20th century, he worked on tapestry cartoons for the Gobelins factory and exhibited his meditative and silent paintings in many Parisian galleries, especially the one owned by his friend Achille Astre, but also Bernheim-jeune and Georges Petit. This still life will be included in the forthcoming catalogue raisonné of the works of Achille Laugé by Nicole Tamburini.