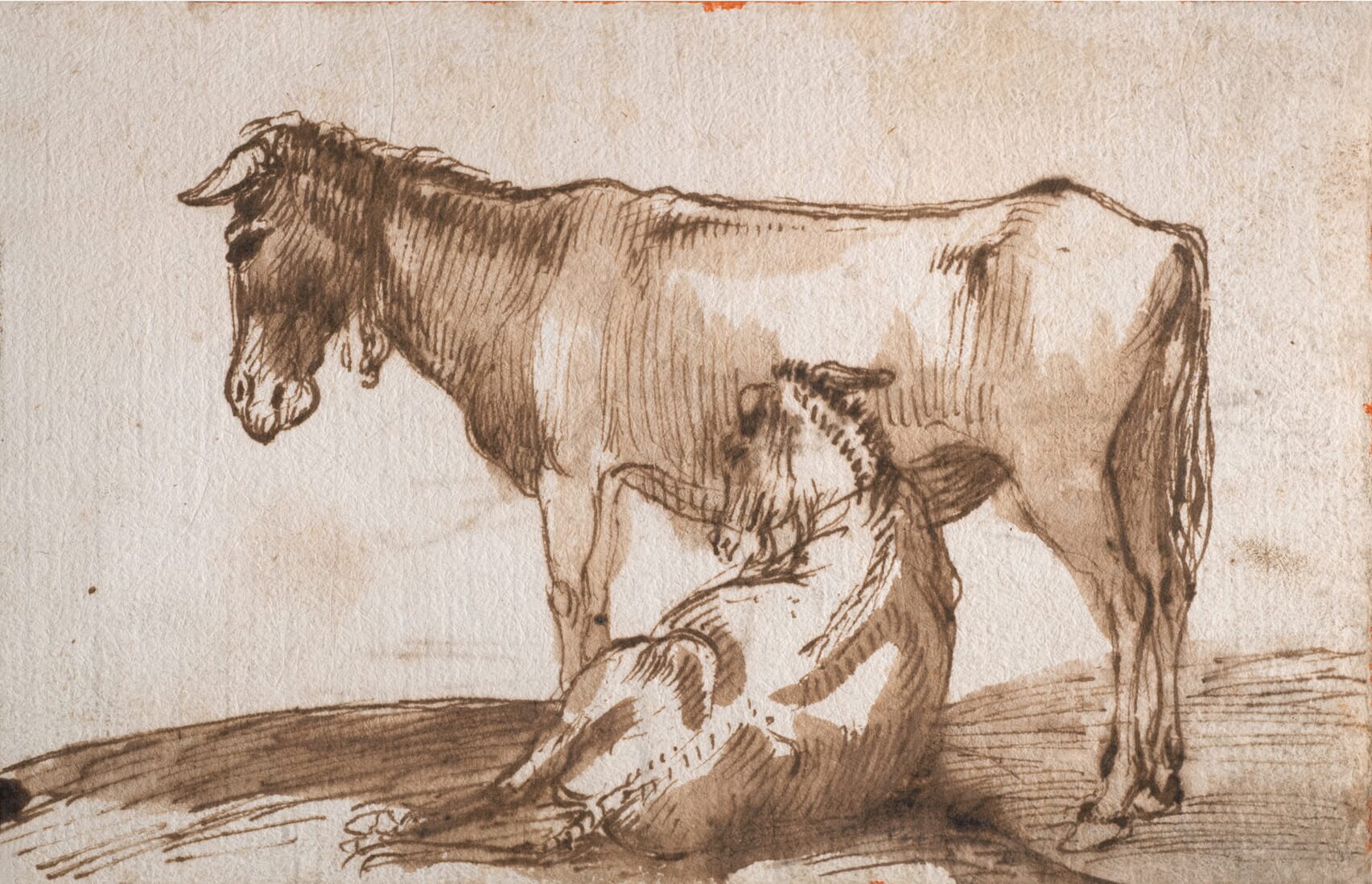 Born in Lorraine and later nicknamed after his native province, Claude Gellée left for Italy in his early youth. His biographers' opinions differ as to the reasons of his departure. He appears to have lived in Rome and Naples and worked for Goffredo Wals and Agostino Tassi. After a brief return to Lorraine in 1625-1627 when he worked for Claude Deruet, he returned to Rome where he settled permanently. There he befriended the pittori fiaminghi, those Dutch and Flemish artists living in Rome who founded the Schilders-Bent – band of painters – whose members Herman van Swanevelt, Cornelis Poelenburch and Bartholomeus Breenbergh were famous for their habit of drawing outdoors, sur le motif. The painter and theorist Joachim Sandrart, Claude's principal biographer, describes how the artist "tried by every means to penetrate nature, lying in the fields before the break of day and until night in order to learn to represent very exactly the red morning-sky, sunrise and sunset and the evening hours." This poetic but tedious habit was later replaced by that of painting directly en plein air, which Claude Lorrain had presumably learnt from Pieter van Laer and Joachim Sandrart.

Animals – mainly cows and goats, and more rarely mules – undeniably populate Claude Lorrain's paintings no less abundantly than human figures, and he drew them in large quantities. It is easy to imagine him marching in the fields drawing the cattle sur le motif, in accordance with the practice he developed alongside the fiamminghi. Claude's graphic corpus numbers about 80 animal drawings. Sixty-four of them come from what Marcel Roethlisberger calls "the animal album". Assembled towards the early eighteenth century, this album put together "sixty-two drawings representing animals and plants by Claude Lorrain"[1] which the Odescalchi family preserved in "six quinternions of paper tied together"[2] according to an inventory of 1713. Among the animals from the album, cows make up the vast majority, with only six drawings of goats, three of mules and of sheep, and four drawings of does. Consigned to Sotheby's for sale by a family member on 20 November 1957, the album was purchased and dismembered by the dealer Hans Calman.[3] Several of these sheets are now in museums and private collections.

According to Marcel Roethlisberger, among these studies dated to the 1630s-1640s, only two out of the sixty-four contained in the album are preparatory for animals in his paintings. Similarly to the present drawing, the majority of these sheets are small in size, sketchily drawn and mainly show animals in profile. All share the same rapid, short and almost scratchy penwork. The horizontal and vertical hatching in the present drawing is characteristic of the artist, who made systematic use of this technique to render animal fur, as well as, occasionally, to depict vegetation, water and tree trunks.

For Sandrart, "he is so unhappy in his figures and animals, be they only half a finger long, that they remain unpleasant in spite of the fact that he takes great pain and works hard on them, and has drawn from life and from statues for many years in Rome in the academies, and that he studied the figures more than the landscapes"[4]. For Baldinucci, on the contrary, "the four-footed animals, particularly cattle, goats, and others are well imitated and finished with great affection"[5]. In truth, due to the rapidity in which some are executed, Claude's animal drawings can sometime appear awkward. Nonetheless they reveal an acute sense of observation and an affectionate attention to nature, and are often movingly poetic, as in the present drawing.

We are grateful to Professor Marcel Roethlisberger for confirming the attribution.