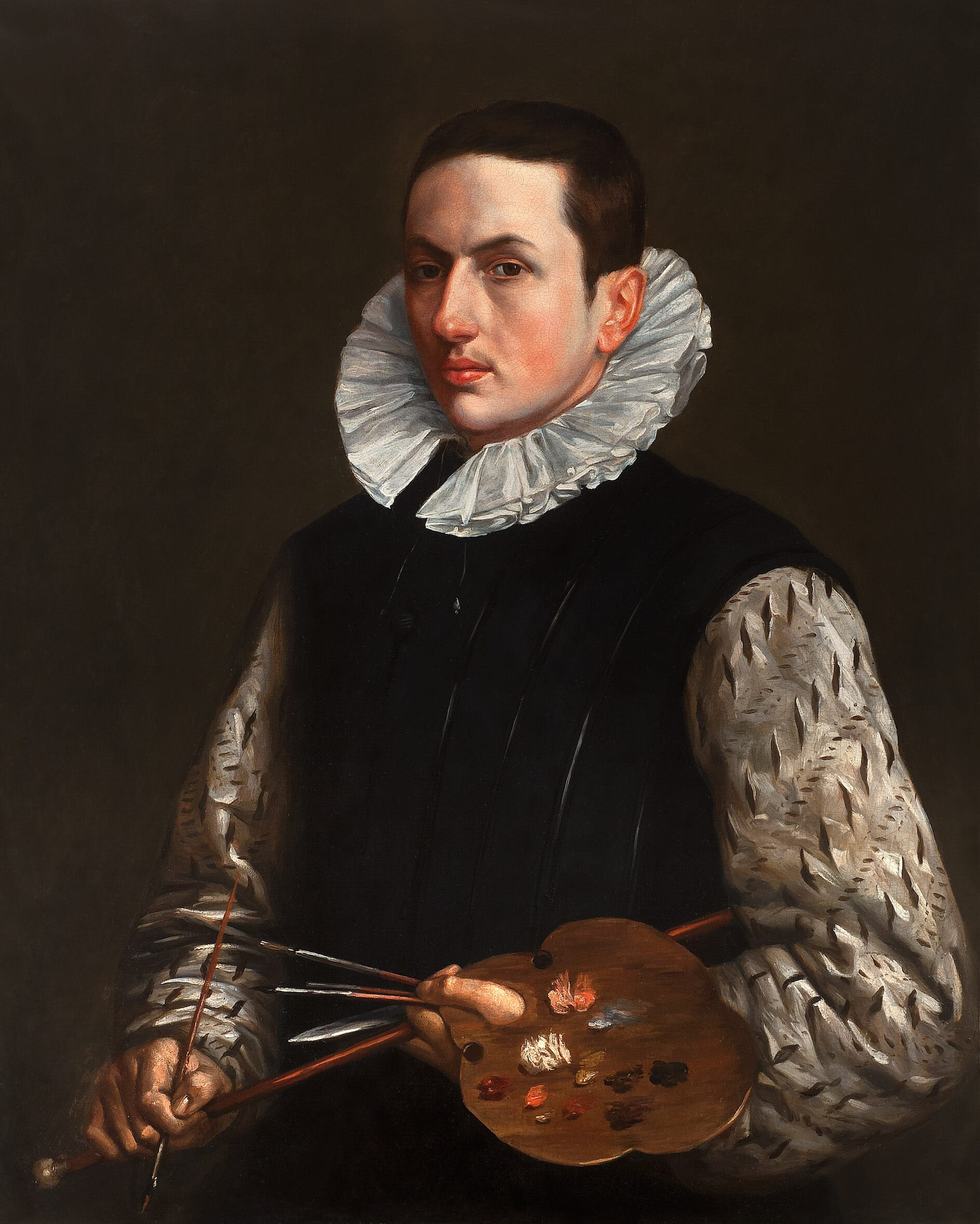 Signed and dated F. POURBUS 157. on the palette

Frans Pourbus was the son of the painter Pierre Pourbus and of Anna Blondel, who was herself the daughter of the painter Lancelot Blondel from Bruges. After the training that he received in his family, he trained further under Frans Floris and became, according to Carel Van Mander, his best pupil.

The famous biographer of the Northern painters left a vivid account of the too-short career of “the excellent [1] intended to leave for Italy in 1566, as Frans Floris had done before him. Carel Van Mander reports how dressed for travel, he set out for Gand in order to say his farewell to the painter Lucas de Heere, Frans Floris’s pupil a few years before him. However, he could not resolve to leave and thus stayed and eventually married the master’s niece. He became master at the Guild of Saint Luke in 1569. Carel Van Mander lists and praises a number of his religious works and then relates the death of the 36-year-old painter from poisoning by sewage vapours. His son, whose talent would soon spread all over Europe, was then about twelve years old.

Although Frans Pourbus’s career was brief, his talent as a portraitist has been universally recognised. Yet today, it is rather difficult to have a clear idea of the extent of his work in this domain. In the Louvre, there is his portrait of Viglius Van Aytta (1507 – 1577), a jurisconsult and the president of the Secret Council of the Low Countries at Brussels who, among other works, also commissioned to the artist a painting for the church of Saint Avon. In this portrait, the stern-looking middle-aged man of the law is depicted standing, wearing a black cloak lined with brown fur, against a background formed by two vertical grey and black strips.

The present painting is probably the artist’s self-portrait at the beginning of his career. It is a work of youth, in which we can feel, despite some blunders, the artist’s pride for his art and the promise of a successful career. On the removal of the old varnish, the signature and the date have been discovered, albeit today hardly visible to the naked eye. The name can be deciphered but the last number of the date poses a certain problem. We believe that we can make out a zero, which places our portrait in 1570, that is, shortly after the artist’s entry to the guild.

There is another version on panel of the present painting in the Royal Museums of Fine Arts in Brussels, currently under restoration[2].The technique of both works is very similar, of equal quality but presenting certain variations of treatment in some areas.For a long time, the painting has been attributed to Cornelis van Harlem on the basis of the sitter’s resemblance to the portrait engraved by Hendrik Hondius (1573 – 1640) in his Theatrum Honoris[3]. Both sitters are indeed young, coiffed and dressed in the same way, but this is insufficient for a confident identification of Cornelis van Haarlem. Besides, this attribution to the Dutch artist had been rejected on several occasions.Incidentally, Cornelis came to Antwerp circa 1579 and visited Frans Pourbus’s workshop, but being rejected by he young master, he returned to Gillis Coignet.[4]

Whether or not it is Frans Pourbus’s self-portrait cannot be proved on the basis of documentary evidence. The portraits of Frans Pourbus the Elder are rare and often posthumous, therefore, unreliable. Thus, the portrait engraved by Hendrik Hondius for his Theatrum Honoris offers a somewhat stiff, rather stereotyped representation of the artist, probably bearing little resemblance.The engraver may have been inspired by a now-lost portrait of Pourbus.Hondius’s portrait depicts the painter a little older and wearing a beard, although this image is not inconsistent with the present portrait.

As for the work in the Uffizzi, Florence (inv. 4059), it is most certainly not a self-portrait, contrary to what can be found in certain publications and was definitely executed later. It is therefore of no use for the identification of the present self-portrait.

What speaks in favour of the hypothesis of self-portrait is the fact that the red paint used for the signature, applied in capital letters in the paint on the base of the palette, albeit hardly legible, is the same that the paint on the tip of the brush that the painter is holding in his right hand. This suggests that the artist just finished signing his painting. Besides, it seems only logical that shortly after his marriage and acceptance to the guild, the painter executed his self-portrait in the flush of enthusiasm and pride. His technique is free, much more relaxed than in the portraits of the late 1570s, which allows us to date this work to shortly after the end of his training with Floris, an Italianate painter who spent a long of time in the Italian peninsula and brought back to Antwerp a style inspired by Michelangelo and, at the same time, by Vasari and Tintoretto.

A portrait of a man that has recently appeared on sale[5], dated to a bit later in his career, shows the same manner of painting clothes with large and visible brushstrokes. As for the ruff, executed in a rapid and almost careless way, albeit well brushed, it is reminiscent of the cuff of Abraham Grapheus in the Fine Art Museum of San Francisco (1957.159, donation of Mr. et Mrs. Arnold H. Bruner).

[2]We would like to extend our deep appreciation to Mrs Sabine Van Sprang for helping us to examine this work, currently in the museum’s restoration workshop.