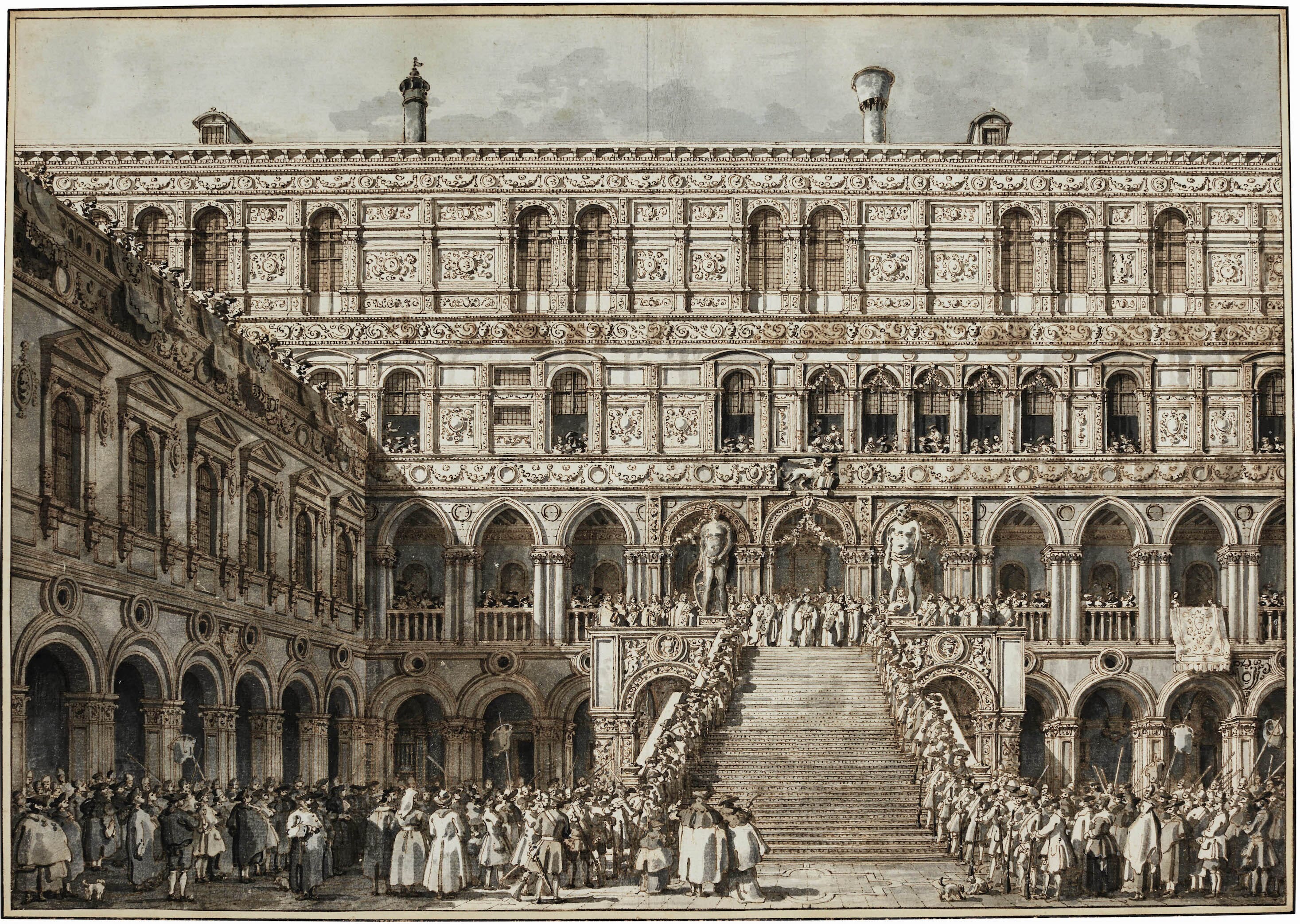 Probably commissioned by Lodovico Furlanetto, Venice; discovered by Sir Richard Colt Hoare, 2nd Baronet, in a bookseller's in Venice probably from Furlanetto, circa 1787-89; thence by descent at Stourhead, Wiltshire to Sir Henry Ainslie Hoare, 5th Bt (1824-1894); Stourhead Heirlooms sale, London, Christie's, 2 June 1883, lot 28, to Grindley, on behalf of a member of the Hoare family; A.H Hoare, Ovington Park, Hampshire, and by descent in the Hoare family until 2005; Private Collection (in recent years on loan to the Dept of Prints and Drawings, British Museum)

-For the present work:

- For the series of Feste Ducali drawings by Canaletto:

This superbly preserved and grandly proportioned drawing, with its centuries-long English provenance, is considered to rank among the greatest works on paper that Canaletto ever made. It belongs to the highly original series of depictions of the ceremonies and festivals of the Doges, known as the Feste Ducali, illustrating the election and installation of the Doge and the Venetian ceremonies and festivals in which he took the leading part at different times of the year. The drawings were conceived as large-scale, finished works which were then engraved in the same direction by Giovanni Battista Brustoloni (1712-1796). Ten drawings from the series exist, four of which are in the British Museum and two in the National Gallery of Art, Washington[2]. Canaletto revelled in depicting the Venetian crowds and Venice's buildings and its traditions. In its scale and compositional complexity this is one of the most ambitious of all his representations of the city. The rendering of detail and light and shade animates the scene with captivating effect, giving incredible variety to the stonework of architectural decoration and animation to Sansovino's sculptures of Mars and Neptune, as well as to the onlookers peering over the window ledges and balustrades and the characteristic dogs wandering among the motley assembly of La Serenissima's inhabitants.

Although architectural accuracy is at the heart of Canaletto's art, images of actual historical events are relatively rare in his work. The grand ceremonial staircase, the Scala dei Giganti, leading up through the central courtyard of the Doge's palace, is the focus of this scene, which became the third in the engraved series. As the figures of the innumerable spectators and the guards become more diminutive the higher up the staircase they lead, so we are brought to locate the tiny figure of the Doge himself – the hat, or Ducal Horn – held above his head. His early training from his theatrical set-designing father may have encouraged Canaletto to compose the scene with a maximum of wit and drama. By telescoping our view into the event, and through the extraordinary wealth of detail he depicts, Canaletto expresses all the liveliness and magnificence of the city and its ceremonial traditions.

The series dates from late in Canaletto's career; the intended patron may well have been the publisher and book seller Ludovico Furlanetto, and the size of the drawings and their extraordinary quality indicate the importance of the project. Canaletto was particularly proud of his abilities as a draughtsman in his later years, as is shown by a more or less contemporary drawing in Hamburg which he inscribed "I Zuane Antonio da Canal, Have made the present drawing ... at the age of 68 Years Without Spectacles. The year 1766". The brilliance of the compositions is witnessed by the immediate success of the engravings and a matching series of paintings by Francesco Guardi, after the prints[3]. The first eight prints were announced for sale by the publisher Ludovico Furlanetto in March 1766. Four months later, he extended the series to twelve plates. The order in which the drawings were made is not known, nor the year in which work began but as one of the drawings now in Washington, The Doge attends Giovedi Grasso in the Piazzetta, includes the arms of the Doge Alvise Mocenigo IV, who was elected in 1763, it can be assumed that this was a significant year and probably the subject for the series. 1763 was also the year that Canaletto was finally elected to the Venetian Academy. Might it be that the drawings were a riposte to the Academicians who had overlooked Canaletto previously, possibly on the grounds that he could be categorised as a view painter[4]? It might also be conjectured that Canaletto's painting of 1760, The Return of the Doge in the Bucintoro on Ascension Day, now in the Dulwich Picture Gallery, London, a record of this triumphant annual ceremony, may have been a catalyst for this series of drawings. There is no record of Canaletto's eleventh and twelfth drawings for the series and the request for the Feste Ducali was probably his last major commission. In fact, of the twelve engravings, we can only be sure that ten were made from Canaletto's drawings or from copies of them reversed for the engraver[5], no paintings generally accepted as being by Canaletto were made of the compositions[6], and judging from differences in the character of the engravings, the two missing models may have been the work of Francesco Guardi[7]. The Venetian dealer Giovanni Maria Sasso remarked to Sir Abraham Hume in a letter of 1789 "che sono Belli quanto quadri", and indeed the engravings after them by Giovanni Battista Brustoloni, one of the most able engravers of Canaletto's work, are inscribed 'Antonius Canal pinxit' rather than the more customary delineavit. The extraordinary skill and artistic delight seen in the present work testifies loudly to the fact that he was absolutely at the height of his powers as a draughtsman at this moment, as W.G. Constable wrote: The Feste Ducali ..'are as elaborate as any drawings Canaletto ever made .. At the same time, they are largely the result of an extremely dexterous use of a series of calligraphic gestures, set within skilfully contrived designs.'. 8]

Some understanding of the successful nature of his career can be gained from the knowledge that on Canaletto's death in 1767, of the 1,500 or so paintings and drawings which are recorded by his hand, only 28 remained unsold and in his studio. And yet he died, according to J.G. Links, if not destitute, nevertheless, a poor man.

The discovery of the ten huge drawings by Sir Richard Colt Hoare (1758-1838), in a bookseller's shop in Venice (most probably that of Ludovico Furlanetto, the publisher of Brustolon's engravings) during his Grand Tour of 1787 and 1789, led to this remarkable purchase. Hoare took all ten drawings back to Stourhead in Wiltshire, where for the next century or so they hung in the specially built library (a watercolour of which shows Sir Richard with the framed Canaletto drawings hung around the chimney piece), the room was presumably kept in a darkened state as the drawings, particularly this one, are in extremely good condition. In fact the present drawing must have been especially admired as it was one of only two from the series to have been bought back by a family member when the contents of Stourhead were dispersed at auction in 1883.

[1] The bibliography for the group of Feste Ducali drawings was compiled and kindly provided by Charles Beddington, to whom we express our gratitude.

[5] The description Antonio Canal Pinxit used in the legends on the engravings has led some scholars to construe that the prints were made after paintings by Canaletto but this is no longer believed to be the case. See entry for drawing in the British Museum on the Prints and Drawings Research website: inventory number: 1910,0212.18

[6] As the outlines of the drawings have not been incised the designs must have been transferred onto tracing paper. This method of transfer would have allowed the compositions to be engraved on the plate in reverse, thereby ensuring that they were in the same sense as the drawings when printed.